How Virtual Reality can be used for Real Estate and Architecture

With the introduction of VR technology in real world, Real Estate and Architecture aren’t confined within their four walls anymore. Goldman Sachs Research believes that by the year 2025, the VR market will exponentially grow to become an $80 billion industry. In other words, headsets like the Samsung Gear VR, the Oculus Rift, the Google Cardboard or the HTC Vive along with software such as Unreal and Unity have just opened the doors for unlimited access into the virtual world.

We are experts in professional VR training. Contact us if you are interested in using Virtual Reality to train your team/employees faster.

In Real Estate, VR managed to do something no one realized it could. Virtual Reality enables us to walk through an apartment as if we were there. Although the graphics may not seem an exact replica of real-world to a critical eye, they are good enough to give us the real feel of the space, depth and layout of the apartment, as well as its surrounding views. 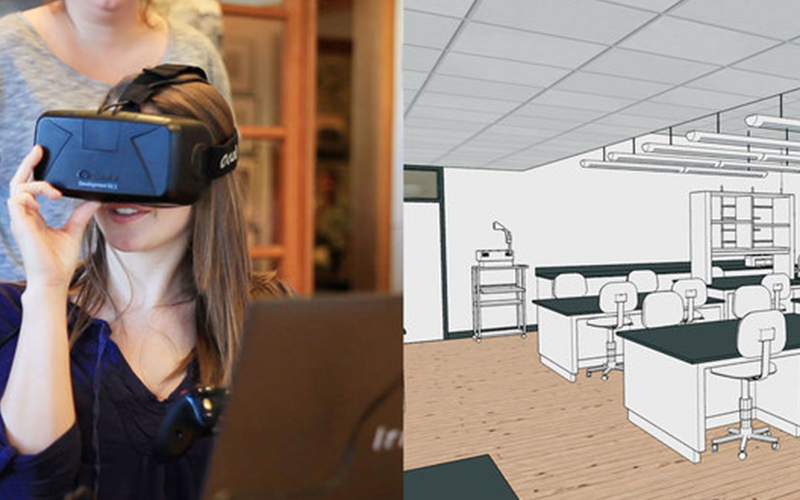 Instead of personally going to explore six apartments (not to mention the waste of time and energy, specially keeping in mind the traffic that will meet us on our way), a realtor can help us take a closer look at them with a headset on, while sitting in his office and not moving an inch. Some virtual visitors have complained that the headset have made them feel a little dizzy if they move too fast in the VR world. But all in all, does this technology give us a crystal clear idea of the property? Definitely yes! So if you weigh the pros and cons, Virtual Reality winds hands down.

While the partner and CEO of Studio216, Jamie Fleming, admits that his business exists on spaces that don’t even exist, he knows that real estate clients are hiring them to have a visual feel of the future. The architecture of a building is no more a physical container, it is something we could ‘walk into’ before it is actually physically created. And doing so just by connecting a set of goggles with a laptop or smartphone, how awesome is that!

So, what does it do for a common man? While many believe that VR’s role in Real Estate is primarily for the big-buck-clients who are either into buying luxury apartments or foreign properties, Mathew Hood at Sotheby’s International Real Estate visions that in the next 10-15 years a common man will wonder how they used to look for homes in the past without using the VR technology.

But let’s look at the bright side: even computers were difficult to purchase when introduced, and now everyone owns one, if not more. Soon Virtual Reality will become a household concept. What is more convenient than the whole family sitting at one place taking a virtual tour inside their dream apartment and probably thinking how they are going to decorate it.

Virt, is using 360° videos to bring real estate into virtual reality quicker, cheaper, and more effectively than any other method with virtual walkthroughs.

Iris VR lets you convert and view your 3D SketchUp, Revit, and BIM models into Virtual Reality with just one click.

Mi5VR offer Virtual Reality designs ( buildings wich doesn´t follow the gravity rules, with no up or down, interactive, multiperspective…), virtual replicas of physical design (3d models where you can walk through it, look all around…) and virtual scenarios of existing spaces (interactive possibilities within spherical 360º videos).

TruVision create fully immersive 3D environments developed from architectural plans which can be experienced through virtual reality headsets such as the Oculus Rift, Samsung Gear VR and HTC Vive.