Virtual Reality, and its immersive nature, are fast changing the way education is being imparted in some of the leading schools worldwide. No longer is the transfer of knowledge restricted to pen and paper, blackboard and chalk, and PowerPoint presentations. It has taken the turn for experience-based learning in its truest form. This is so because with virtual reality, the observer is transported into a whole other world which has been designed to provide visual and tactile stimuli to them. This aids in more adequate retention of knowledge.

Apart from general educational activities pertaining to science and mathematics, in recent years the concept of virtual reality-based language learning is starting to take root and for good reason; in order to be fluent in any given language, or having a sound grasp of it, you have to be immersed in a surrounding where it is the primary medium of communication. Think of it like this, if you are learning Spanish in the Netherlands, you won’t have an adequate exposure to the language. This translates to a poor linguistic retention. However, if you choose to pursue this endeavor in Spain, or any other Spanish-speaking country for that matter, you are far more likely to succeed. Simply, because you will have countless avenues to practice your language skills in a real-world setting.

Being exposed to favorable linguistic conditions with virtual reality

This leads us to an important point – most people who are learning a foreign language are not exposed to favorable linguistic conditions like the ones mentioned earlier. This severely hinders their ability to learn a new language effectively. So, virtual reality is looking to bridge this gap by exposing the subject to a virtual environment where their language of choice is the main mode of communication.

Since the advent of consumer grade virtual reality gear – two such applications have been designed: Lingoland and House of Languages. The former takes you to real world situations and transforms your virtual environment in an interactive, object-based language learning medium. For instance, you want to be prepare for a Chinese market in Beijing, you will be able to learn the names of certain objects by opening the related situation in Lingoland.

Something interesting, Stanford-based researchers have devised an algorithm that can describe a virtual reality scene almost as well as people. Couple this with the fact that 3D-scanning technology is poised to come to our cellphones in the near future and you have the recipe for an excellent language-learning experience!

The latter, House of Languages, is already available on the Gear VR. It involves a raccoon that is looking for you to find certain objects in a virtual environment. The catch is that the object’s names would be in the language that you are learning. Often you will hear the name or the name would appear as a thought-bubble on the raccoon’s head. Then you will have to view through the environment to find the object in question. There are several environments in this VR experience, each with its own set of animated objects. 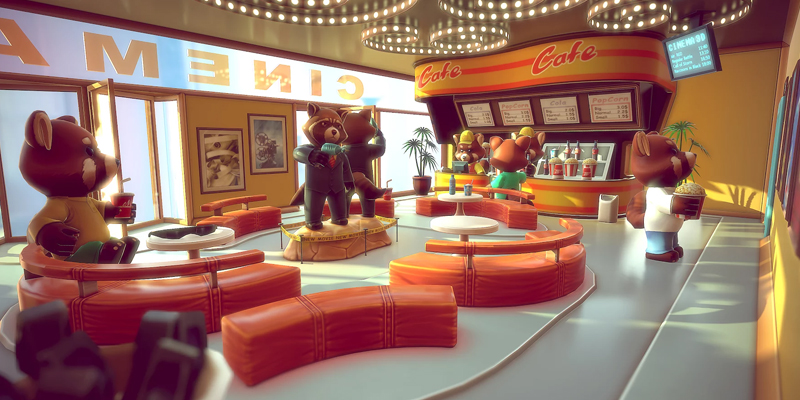 Virtual-reality is definitely showing increasing promise in the educational sector and that day isn’t far away when it becomes one of the main medium of education.

What about you? Would you learn a new language in virtual reality? Share your thoughts in the comments!